Something's come over us


A local school teacher (Cory Poole) was able to raid his retirement fund to purchase a special telescope so he could shoot this time lapse.

Of course, by now, it's gone viral and everyone who isn't a Luddite has already seen it.

In case you aren't aware of how this occurs, every now and again the Moon finds itself stuck directly between the Earth and the Sun. But since it is really tiny compared to the Sun it can't block all of the light so things get dimmer than usual.

Here's a map of where is occurred in my stompin' grounds. Note how only the cool folks in Oregon and the mostly unspoiled masses in California were able to view this event from the comfort of their own homes. 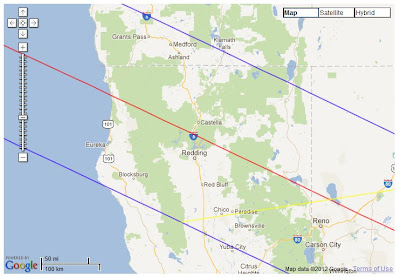 Yes, people, the deity at hand recognizes where Northern California (no Sacramento, no San Francisco) really is.