Couldn't pass this up

...and zig-zag, which is how I am now running so it is more difficult for you to hit me with the rocks you're throwing

Labels: a to z, random verification words from blogger

The train was quite crowded and a U.S. Marine walked the entire length looking for a seat
But the only seat left was taken by a well dressed, middle-aged, French woman's poodle
The war-weary Marine asked, 'Ma'am, may I have that seat?'
The French woman just sniffed and said to no one in particular, 'Americans are so rude.
My little Fifi is using that seat.'
The Marine walked the entire train again, but the only seat left was under that dog
'Please, ma'am. May I sit down? I'm very tired ......'
She snorted, 'Not only are you Americans rude, you are also arrogant!'
This time the Marine didn't say a word, he just picked up the little dog, tossed it out the train window, and sat down
The woman shrieked, 'Someone must defend my honour!
'This American should be put in his place!'
An English gentleman sitting nearby spoke up: 'Sir, you Americans seem to have a penchant for doing the wrong thing.
'You hold the fork in the wrong hand.
'You drive your cars on the wrong side of the road.
'And now, sir, you seem to have thrown the wrong bitch out the window.'

Labels: I'm prolly not goin' straight to heaven, via email

Labels: a to z, I'm prolly not goin' straight to heaven

A to Z... where we get creative from here on out

W is for Wrecked
as in, "Leroy passed so much gas he wrecked his underwear."

A to Z... sometimes it's obvious

Stunk
The obvious would be too easy

How many of us felt about the news this week

Thanks to a much better blogger than I for the clip...
...and the laugh

A to Z - how's he gonna handle this one


Q is for questionable
Well, think about it
Isn't the direction this entire exercise has gone so fare just a little questionable?

P is for Pocket Thunder - as in the sound of Flarp

O is for Oregon opportunities
Look as the letter O and tell me isn't that just a perfect...

You can get one for playing video games 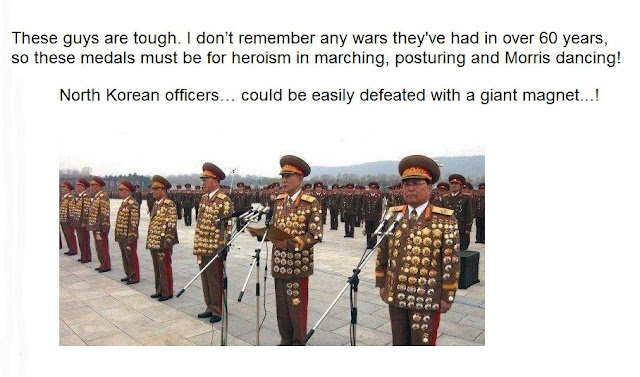 A to Z gets complicated

N is for nasty...
...because there is absolutely nothing at all nice about where this is going

A brief interruption is most appropriate

A to Z gets complicated


The kids on the bus mooned the...

The ol' AF Sarge wondered out loud on Suldog's blog about whose side I was on
That almost sounds like a challenge
A throwdown
A whatchamacallit
He really should watch himself
Buck almost got him courtmartialed, or at least nonjudicial punishment
o' course I thought the charges were pretty lame
Does that mean I was on his side?

Labels: another attempt at promoting someone else's blog, original material (sort of)

A to Z is tricky

L is for Let one go
Then point at the dog, or your brother

Labels: a to z, triskaidekaphobia

A to Z still on a roll

K is for Kiester
Who uses that word any more?

A to Z at noon

Before we get too far along, understand there will be no long drawn out posts
This is supposed to be a fun exercise, not a home work assignment

...Junglerot, aka...
Oh, wait I many need that for another letter

A to Z... there may be exceptions

I is for it seems improbable but there's not a word that comes to mind at the moment
But it's only noon...
...and there is always ish, which give more than one way to go
...or there is ick

A to Z... and it isn't rocket surgery

H is for horse dumpling

Then I thought about it
What if I try to spell the sound of that grunt from yesterday:
"Hnnnnnnnnnnnaaagh!"
Yep, that's really what H is for

A to Z... this is getting weird

Labels: a to z, TGIF

D is for Dung, which... well you might be getting the drift of this now

C is for constipated, which may have an adverse effect upon A

B is for butt, which is where the letter A is located

Visit again tomorrow to see if we can maintain a them


BTW - as in the one other time I did this, I have not signed up
I'm just doing it