George  Bush, Queen Elizabeth, and Vladimir Putin all die and
go to hell.  While there, they spy a red phone and ask what
the phone is  for.

The devil  tells them it is for calling back to Earth. Putin
asks to  call Russia and talks for 5 minutes. When he is
finished,  the devil informs him that the cost is a million
dollars, so  Putin writes him a check.

Next Queen  Elizabeth calls England and talks for 30 minutes.
When she is  finished, the devil informs her that the cost
is 6 million  dollars, so she writes him a check.

Finally  George Bush gets his turn and talks for 4 hours.
Whenhe is  finished, the devil informs him that the cost is
$5.00.

When Putin  hears this, he goes ballistic and asks the devil
why Bush  got to call the USA so cheaply. The devil smiles
and replies,  since Obama took over, the country's gone to
hell, so it's a local  call."

No ...I been here all along 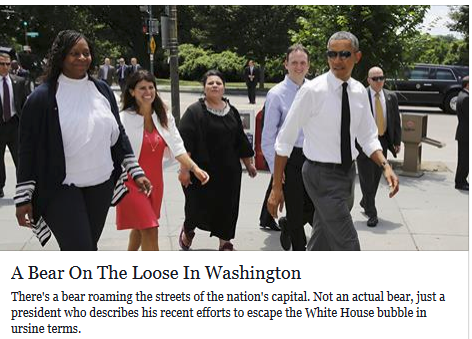 
"I just walked over to Chipotle's for lunch. I caused a lot of havoc as you might expect," the president said. "It had been awhile since I had the burrito bowl, and it was good."

Does this man have a clue what every move he makes outside of the security of the White House or Camp David ...oh, wait, he and his family are too good for Camp David ...does to disrupt the routine activities of the people who have to function in the places he spontaneously visits?

I've been in a city where the President has made a sojourn on the ground
Everything within a quarter mile ...sometimes often further comes to a complete halt until whatever it is that's planned is no longer a viable plan
Try explaining to a little kid that he can' go to the zoo because the President was there, that he has to stay in his car seat, in the car until the nice policeman says you can move

If that man didn't want to be cooped up (for his own protection, mind you), he should have found a different job
Posted by IT (aka Ivan Toblog) at 12:17 PM 1 comment: