Zipper pulls and other oddities

So my friend, Suldog, filleted (his word, not mine) me this morning. I'm not disappointed, though he promised barbecue. It all came about because I presented him with an award.
Imagine that.
As a stalker I knew exactly what to expect when the award was presented. I know that had he had more time to gather information, Sully would certainly have been able to draw and quarter this humble blogger. His claim is that he actually refrained from ragging on the pen name. Hey, take a shot bucko. IT's [IT=Ivan Toblog] a pseudonym and fair game. Aren't in this for entertainment first and enlightenment by accident?
Now that I think about it, there may be some actual residual effect from his post. I might see a few more visitors here. Oh, wait! That won't happen because I don't track visits. I find it absolutely amazing that I even have any followers/stalkers. I'm even more amazed that, aside from Sullivan, they're mostly complimentary.

Oh, and he further commented on the avatar I use.
I could have used this photo since it's in the public domain. 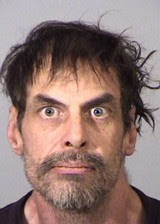 But the guy is supposedly really dangerous.