Yesterday, Jane noticed the local crew who observe every move I make when I am at the desktop computer(s).
She then asked me if theses critters have names. 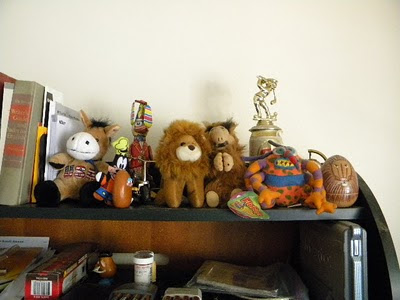 It turns out that several of them do have names. The second from the right is a "FluBug" named
B-Strain Bob. He used to make some really horrendous sounds. Next to him is ALF. Then way over to the left, hiding behind the mini Potato Head, is Goofy. None of the rest have been named and none were named by me.
So here's the challenge...
Name the rest of the critters, except for the golf trophy.
Posted by IT (aka Ivan Toblog) at 6:19 AM